It’s on again! Yes, beer lovers will be happy to hear that the HINTERLAND CRAFT BEER FESTIVAL is back for 2022, bringing together local breweries, live music, food trucks and Eumundi good vibes. The free-entry and family-friendly festival will take place at The Imperial Hotel Eumundi on Saturday 25 June from 12noon til 8pm.

“The Sunshine Coast has unquestionably developed a solid reputation as the craft beer capital of Australia,” Paul says. “It’s been terrific to see so many breweries emerge over recent years – and there’s a real sense of camaraderie amongst the brewers.

“This event gives brewers a great opportunity to come together and share their creations – the tried-and-true, much-loved favourites, along with new seasonals and some more experimental small-batch brews.

“There’ll be something tasty for all festival-goers to sample – ales, lagers, sours, porters, stouts, IPAs and ginger beers. And for those wanting an alternative, there’ll be a Gin Bar serving up the Eumundi Distillers’ Folktale gins."

To accompany the brews and bevvies, there will be some seriously tasty street food on the menu including Traditional German Sausages, SoCal Tacos and Nimo’s Schnitzels.

The festival also boasts a program of live music and grooves throughout the afternoon and into the evening, with a line-up that includes BLUES ARCADIA, BENNY O, and the RYAN GILES TRIO. The Imperial Hotel’s Vinyl DJs will have the turntables spinning, and there’ll be BEER FEST KARAOKE taking place in The Bunker from 5-8pm for those keen to get on the microphone.

Roving performers will have guests laughing, and there’ll be a raft of old skool pub games to play on the day. 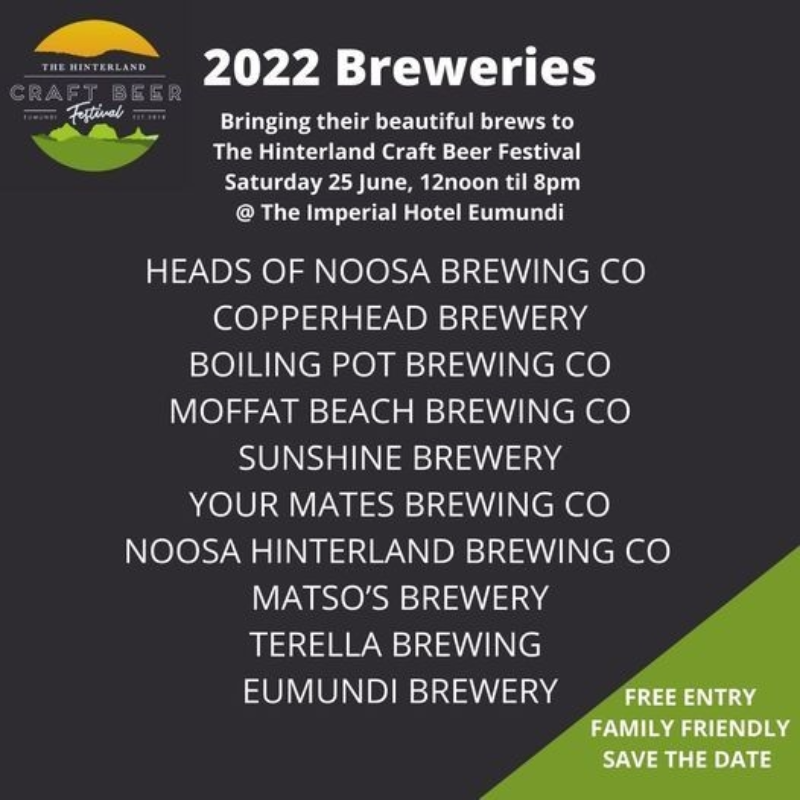