KEEPING IT ALL IN THE WILLIAMSON FAMILY AT NOOSA ARTS THEATRE

Sunshine Beach local and family patriarch David Williamson is widely recognised as Australia’s most successful playwright, and over the past 50 years his plays have been performed throughout Australia and produced in Britain, United States, Canada and many European and Asian countries. Altogether he has written 12 screenplays and five mini-series, including The Four Minute Mile for the BBC and The Last Bastion about General McArthur’s arrival in Australia in World War 2, which was sold all over the world.

His play Up for Grabs, written in 2001, will explode upon the Noosa Arts Theatre stage on 22 July, but be warned…it’s not for the faint-hearted! Up for Grabs is a visceral, blunt and confronting roller-coaster ride. It may even shock you.

Just to make it even more watchable, David’s son Rory Williamson, now running his own successful real estate agency Williamson & Co in Noosa Junction, after moving to Noosa in 2016, will direct his father’s play. Rory last appeared on stage at Noosa Arts Theatre in another of David’s plays, Jack of Hearts in 2017.

Rory grew up in Balmain in Sydney and graduated from NIDA in 1999 as an actor. His first role out was starring in New Zealand’s favourite serial Shortland Street as Dr Paul Exley. Following that you may have seen him on Paper Giants, Underbelly Badness, All Saints and Home & Away. He then produced the AFI award-winning documentary That Sugar Film in 2015, about the evils of sugar, a passion project that also got him noticed.

Sydney-based actor Felix Williamson, Rory’s stepbrother and David’s son, also a NIDA graduate, will play Manny, a successful entrepreneur with a dark secret, in Up for Grabs. Felix has had a long and successful career in film and TV, memorably playing Paul Keating in Hawke. Roles in The Great Gatsby, Palm Beach, Rake, Mabo, Backyard Ashes, Underbelly: Razor, Dirty Deeds and many others followed, including writing, directing and acting in Avalon Now, a hilarious, observational take on pretentiousness on the Northern Beaches in Sydney.

Up for Grabs asks the question…art dealers: parasites or prophets? Simone Allen would prefer to see herself as the latter, but when she is given the opportunity of her career, a chance to sell one of the better Whiteleys, her behaviour becomes less than angelic as the pressure mounts. Driven sometimes by greed, sometimes by aesthetics, Williamson’s characters discover how far they will go when more than just a beautiful work of art is Up for Grabs in this sexy comedy of manners.

Tickets are selling fast. Tthe Gala Opening Night, part of the NOOSA alive! Festival on 23 July has already sold out. Proceeds from the 29 July performance will go to assist the people of Cobargo in New South Wales whose town was destroyed by the devastating bushfires of last year. Good news is there are still good tickets available, so do yourself a favour and grab a ticket or two to see what happens next!

Book online or by phone - see details below, or counter sales from Tuesday to Friday, 10am to 2pm at 163 Weyba Road, Noosaville.

Pictured: Felix, David and Rory Williamson at Noosa Arts Theatre, preparing for the season of Up For Grabs. Photo by Travis Macfarlane 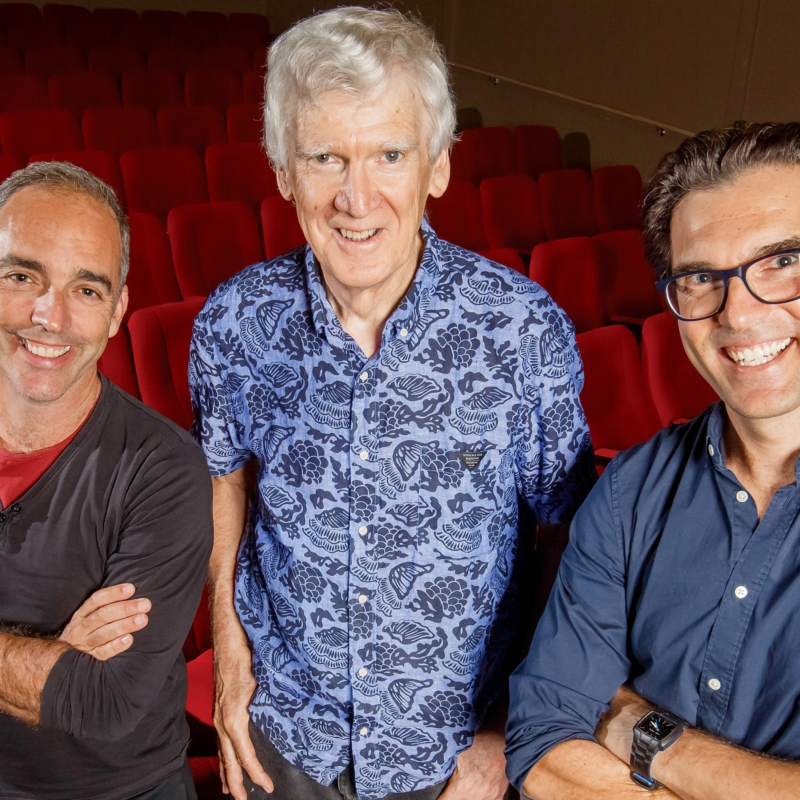